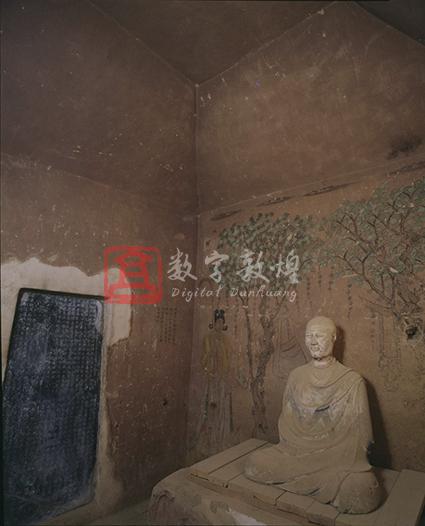 Constructed between the fifth year of Dazhong era and the third year of Xiantong era (851-862), this cave served as a memorial cave for Hong Bian, a Monastic Official in Hexi region in the Late Tang dynasty. It is located in the north wall of the corridor of Cave 16 and was discovered by Taoist priest Wang Yuanlu who lived at Mogao in the 26th year of Guangxu era of the Qing dynsty (1900). It is called the Library Cave because there were over 50,000 cultural relics including Buddhist scriptures, social documents, silk paintings, embroideries, and Buddist utensils dating back to the fourth to the fourteenth centuries. The cave is square in plan with a truncated pyramidal ceiling. There are no murals on the four slopes or the ceiling center. An octangular altar is built in front of the north wall, on which a statue of the monk, Hong Bian sits. The west wall contains a stele recording that Hong Bian was appointed the highest Buddhist official in Hexi region in the fifth year of Dazhong era (851). There is a painting of two trees of the Late Tang on the north wall. Under the tree on the west side is an standing upasika (holding a scepter and towel). A cloth bag is hung on the tree. Under the tree on the east side is a Buddhsit nun (bhiskuni, holding a silk fan), and a water kettle is hang on the tree. There are no wall paintings on the south and east walls, no corridor and no front chamber.

On the west wall is a stele engraved in the fifth year of the Dazhong era (851), which records the official appointment of Hong Bian. The stele is 1.5 m high and 0.7 m wide, and it was divided into three parts. There is an inscription left by Zhang Daqian on the south sdie of the west wall, which says: "This is the masterpiece of the Mogao murals. It should have been painted by scholar-offical. Later Ma Hezhi learned this skill and became a famous painter too. In September, Zhang Daqian from Sichuan came and was surprised by it, then left this inscription. "

There are a paintings of two trees of the Late Tang dynasty on the north wall, one tree is on the west which hangs a cloth bag ,with a upasika standing by, and the other is on the east with a water kettle hanging on and a bhikhuni standing by.