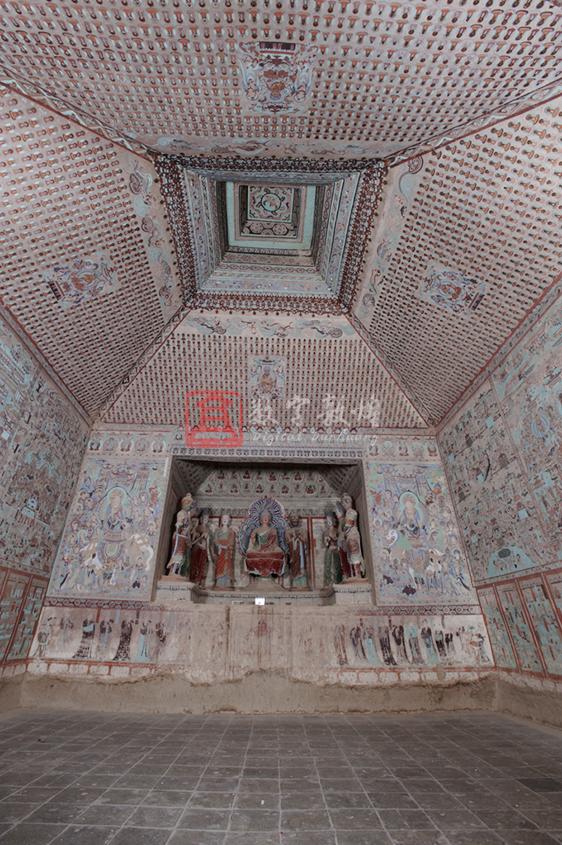 The construction of this middle sized hall cave with a truncated pyramidal ceiling was prior to the tenth year of Xiantong in the Late Tang (869) and it was renovated in the Five Dynasties.There is an ink inscription on the east wall above the entrance, which reads: "Spondored by Monk Suoyi, a Buddhist official from the Jinguangming Temple." There are altogether 10 sutra illustrations in the main chamber. The south and north sides out of the west niches repectively depict the illustrations of Samantabhadra and Manjusri. The upper part of the south wall is filled with the illustrations of the Lotus sutra, the Amitayur-dhyana Sutra, and the Maitreya sutra from west to east. The upper part of the north wall is filled with the Garland Sutra, Sutra of the Medicine Buddha, Sutra on the Questions of Devas, and The north and south of the entrance in the east wall are respectively the illustration of Vimalakirti sutra and Panikarasuttau sutra. The spaces below the illustrations on the south, north and east wall all are divided into three for four strips of screen paintings illustrating the stories in the corresponding sutras. The north and south walls of the corridor are painted with donor figures. The south and north side of the entrance wall in the front chamber respectively show the Virūdhaka (king of the south) and Vaisramana (King of the north).

There is a male and a female donors on the wall above the entrance with two attendants, the inscription beside the image reads: "Donated by Suo Yibian, a Monastic official from the Jinguangmin Temple in Shazhou......" The last words in the lower part have lost.The north of the entrance presents an illustration of Vimalakirti with three screening paintings in the lower part which are stories about the Expedience of the Lotus sutra. The second painting counting from the north is a scene of a simple bar, where Vimalakirti holds a whisk preachig to ther other customers, all seated on short seats. The north side depicts two female donor figures. The south side contains an illustration of the Panikarasuttau sutra with three three screen paintings below telling of the stories of the evil prince.

The south wall contains the illustrations of the Lotus sutra, the Amitayur-dhyana Sutra, and the Maitreya sutra from west to east, with 11 screening paintings below them.The first four paintings show the thirty-three menifestation fo Avalokitesvara, the next three depicts the Sixteen Meditations and the story between,and the last four paintings introduce all kinds of things happened in theworld of maitreya, including Maitreya\'s mother dreaming of the pregnance, the birth of Maitreya under a tree, Maitreya\'s seven steps with a lotus growing out of each foot prints, the departure and the enlightenment of maitreya.

The west niche has five Buddhist statues made in the Qing dynasty.On the U-shaped altar there are 20 door like frames filled with the images of musicians and flowers. The ceiling center is a large medallion in the form of checks and the four slopes are covered with 50 small Buddhas. In the niche, there are four screen paintings on the west wall, three on the south wall, and three on the north wall, all illustrate Buddha\'s life stories. On the upper of the niche are 16 images of seated Budddha.In the middle below the niche are utensiles for offerings, and the south side of it are 13 female donor figures and on the north are 16 female donor figures (part of them are blurred). The south side out of the niche has a painting five Buddhas from ten directions in the upper and an illustration of Samantabhadra below. The north side out of the niche has five Buddhas from the ten directions in the upper and an illustration of Manjusri below.

The ceiling center is a lotus with a lion pattern surrounded by various decorative borders like the medallions, two partly overlapped squares, lozenges, twisted vines and draperies that extend to the four slopes. There are 16 apsaras around the central design. Teh four slopes each are covered with the Thousand Buddha motifs in which there is a preaching scene in the center.

Three female donor figures (one of them is obscured)

Only four groups of Bodhisattvas attending the Assemblies left with a Buddhist monk below survived.

The south side of the entrance depicts an image of a heavenly king in the upper part and and male donors, offerings like camerals, horses in the lower part. The opposte site has an heavenly image in the upper and a row of male donors below. Vaisravana wear a crown in Han Chinese styled armors,felt boots, sitting with one leg pendent. With knitted eyebrows, upright eyes,eagle\'s nose and tightly closed mouth, he looks dignified and valiant. The colors are applied delicately in neat formation.

Only four groups of Bodhisattvas attending the Assemblies survived

There are six rows of the thousand Buddha motif painted in the Later Tang dyansty, and two rows of the Five Dynasties