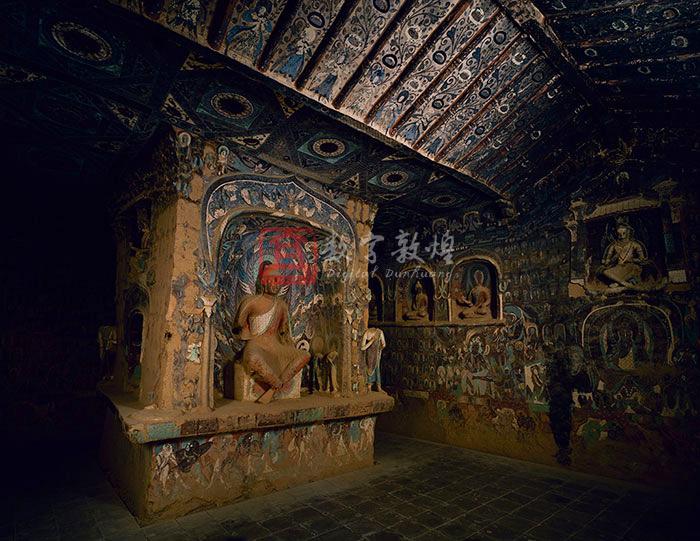 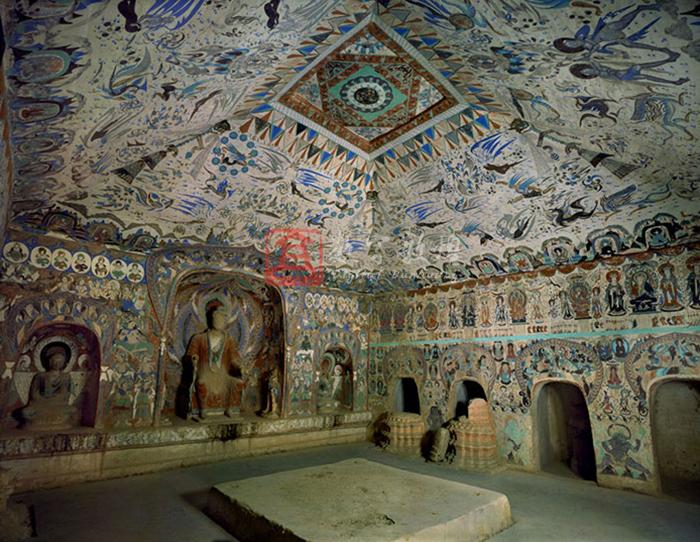 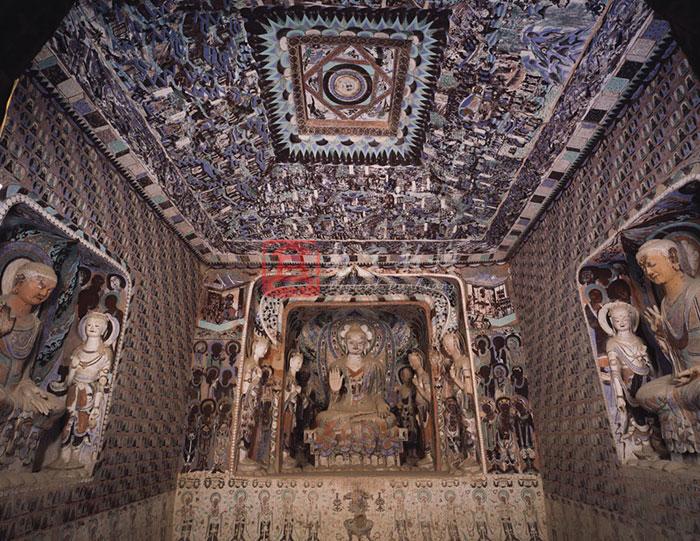 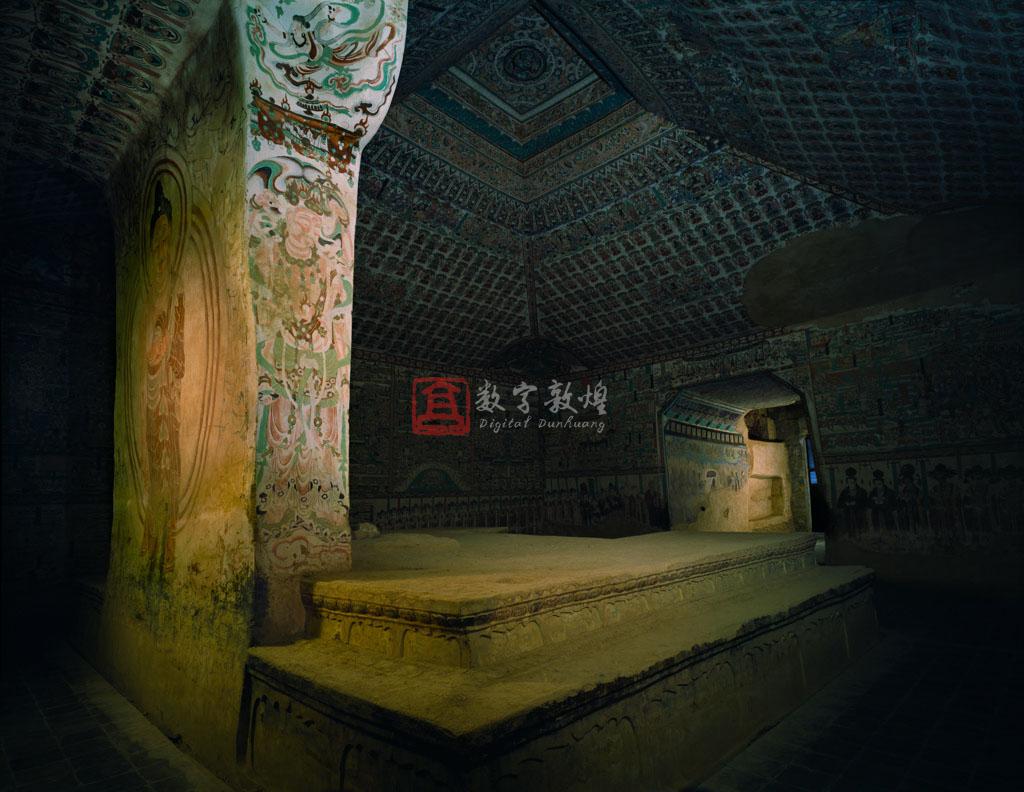 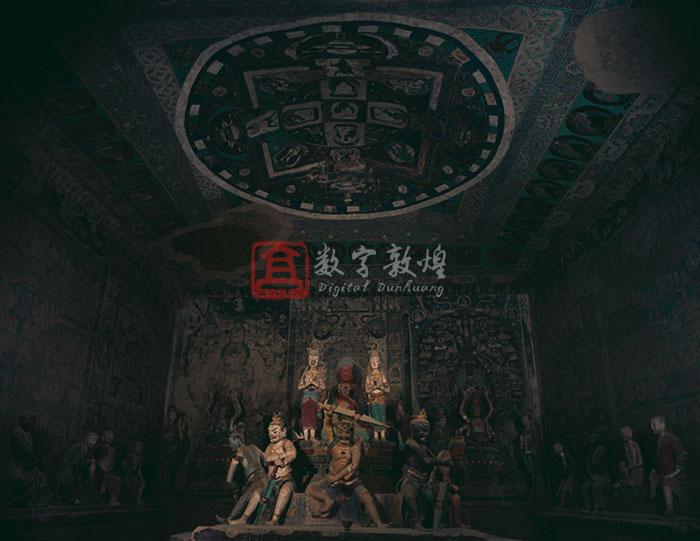 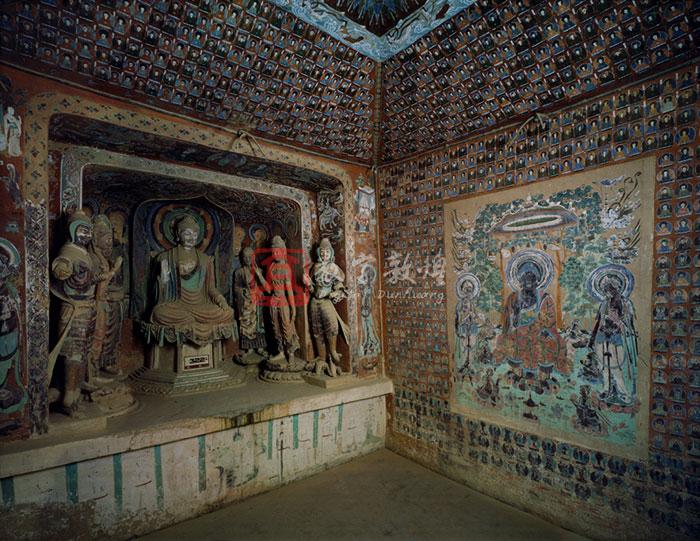 In the center of the north wall is a preaching scene, and around it are episodes from the Lotus sutra. Some of the scenes are vague and those identifiable ones include the illustrations of different chapers like the Introduction, Expedients, Fables, Predictions, and Emerging from the Underground.

The upper part is decorated with the thousand-Buddha motif, and the middle part shows five stories from west to east: 1. Emperor Han of the Western Han obtaining a gold image from the Huns and then sending Zhang Qian to explore the Western Regions; 2. The pond and stone where Sakyamuni washed and dried his kasaya; 3. the miracles of Fo Tucheng; 4. King Asoka worshiping the pagoda of the heretics;and 5 the magic power of Kang Senghui. The lower part is a picture of seven bodhisattvas.

On the south wall, there is a central preaching scene of Maitreya surrounded by the thousand Buddha motifs. On the lower section there were originally a few donor figures (most have been damaged). In this preaching scene, there are more than sixteen figures including the Buddha, bodhisattvas and disciples. Only the head or half body of the other figures are visible except the central Buddha, the two large-sized bodhisattvas, and the relatively small-sized heavenly kings. Under the parasol in the center, Maitreya Buddha sits in lotus position on a lion throne and preaches.

The whole north wall is covered with the Amitayus sutra illustration, which consists of a middle part and two side scene respectively for the pure land of Amitabha in the center, the Sixteen Meditations on the east and the stories between Binbisara and Ajatsatru on the west. Amitabha sits in a lotus throne in the center, flanked by two attendant bodhisattvas. On the side platforms are groups of bodhisattvas led respectively by Avalokitesvara and Mahasthamaprapta. There is a group of grand buildings above Amitabha. The middle group includes the front and back halls.

In the center is King Father of the East sitting in a dragon-drawn chariot. Now only the four dragons, the chariot as well as the attendants around are visible. The upper part of the chariot is damaged. There are also mythic images of Wuhuo, Kaiming, plumed human beings, Yuqiang, and Feilian.

On the upper part are images of sixteen heavenly musicians, below them are the thousand Buddhas in the center of which is a preaching scene, and at the lowest part are narrative story paintings of the Nine-colored Deer Jataka, which consists of eight episodes. The story begins from two ends and ends in the middle. The episodes are: 1. a man fell into the river; 2. a nine-colored deer saved the drown man, devadatta; 3.devadatta knelt down to thank the deer; 4. the queen of the kingdom wanted to capture the deer; 5. devadatta told the king where the deer lived; 6. the king led his army to hunt for the deer; 7. A crow awoke the deer; 8. the deer told the king about devadatta.

Most of the illustration were severely damaged by Langdon Warner who tried to peeled it away. The upper part of the picture are four intact flying apsaras scattering flowers in two symmetrical but dynamic groups. The former looks back, echoing with the movement of the latter one.In composition, the narrow blank along the upper brim is used artfully. This is one of the representative picture of Apasara of Early Tang period in Mogao.

Cave Number (Mogao)329 The Ceiling of The Niche Dugging Out of The West Wall of Main Chamber
TIME: Early Tang Dynasty(A.D.618-712)

A niche is dug out of the west wall, containing a Central seated Buddha flanked by two disciples and four bodhisattvas. All except the torso, costume and the diamond throne, which are originally made in the Tang dynasty, are renovated or painted in the late Qing dynasty. A few apsaras are painted on the upper part of the niche. The south and north sides show the Great Departure and the Conception respectively, in which there are the gods of thunder and wind, dragon-riding immortals and incarnated boys. The walls of the niche are covered with a halo of flame patterns. On each side of the Buddha are four disciples and apsaras and incarnated children. There is a heretic figure on either side of the central Buddha.

A Maitreya sutra illustration is rendered on the north wall, in which the preaching scene of Maitreya under the dragon-flower tree together with the two Assemblies of Maitreya on the two sides form a structure of triangle. In front of Maitreya are scenes of King Sankha presenting seven national treasures and a treasured pagoda to Maitreya, Maitreya the giving the pagoda to Brahmen, and the Brahmen pulling down the pagoda and getting their own share. These stories embody the philosophical ideas of Buddhism: life is impermanent and very short, only renounce the secular world and practice in seclusion can people get rid of the disasters in secular life and enter the pure land. 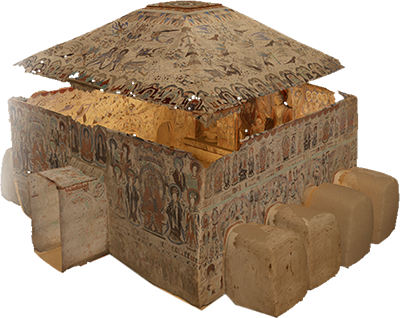 Dunhuang Grottoes is not only a brilliant art treasure of ancient Chinese civilization, but also an important witness to the dialogue and communication between different civilizations that had taken place on the ancient Silk Road. Guided by cultural relics protection philosophy, this Digital Dunhuang Project is pursuing overall digitization, including collection, processing and storage of the Dunhuang Grottoes and related cultural relics by using advanced science and technology. It integrates all kinds of data including the photos,videos,3D data and other literature data into a digital repository of cave cultural relics which is diversified and intellectual, and can be co-shared globally through Internet. A support system will also be constructed for digital asset management system and digital resource science.

The "Digital Dunhuang" project is of demonstration significance in this century, and it has a long way to go. On the basis of extant achievements, we will continue to innovate and cooperate with others to make unremitting efforts for the permanent preservation and sustainable use of Dunhuang's cultural heritage.